How does Chamber membership help your business? 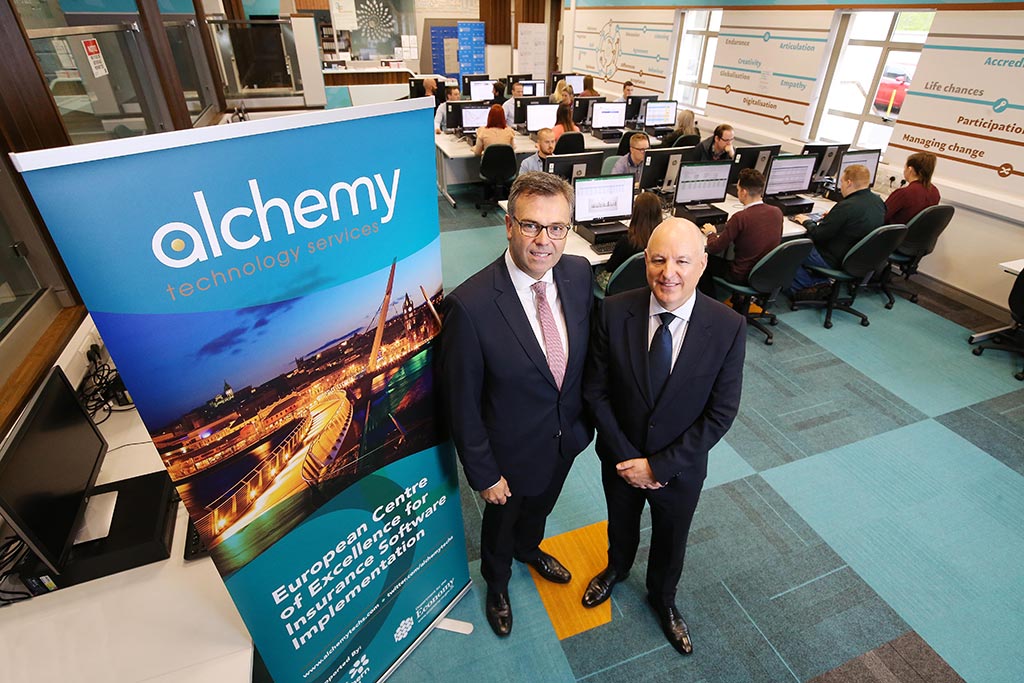 John Harkin, Founder and CEO of Alchemy Technology Services, wants to help our businesses and our young people sing, not in the traditional sense of the world, but by working in vibrant, thriving and interesting environments.

The 56-year-old former Top of the Hill man moved back to his home city in September of last year after years spent working all over world with KPMG. Ten days after arriving home he opened the doors of Alchemy in Queen Street with a view to transforming the insurance industry.

He says he has been greatly helped by the Chamber of Commerce in making beneficial connections so as to aid his dream of giving something back to the city and the institutions that helped propel him to global success.

“I came by my qualifications by a rocky road,” he says. “I went to St Brecans. It was not a great time for that school. So I went off to the Tech and be more accustomed to getting myself into university life. It was a mixed campus, it was not uniformed, there was a lot of reliance on studying yourself. I enjoyed it greatly. Today the Tech, or the NWRC as it is now known, is key to the success of Alchemy. They are running the Academies for us and are a very close partner, as well as the university. We have 256 jobs that we have committed to over the next three years. Giving back to my city and the young people here is very important to me.”

John dominated the Derry Feis singing competitions as a child and was once named ‘The Most Promising Voice in Ireland’. He says these days he doesn’t sing as much anymore, bar a impromptu tune at the office Christmas party, but can clearly see the similarities between music and business and the importance of allowing staff to ‘flourish and sing’.

“Part of the name for Alchemy, is that the highest level of adulthood development is called Alchemist, or magician,” he says. “The Alchemist strives for ego disintegration and tries to be invisible. It’s that saying about helping people and the people believing that they did it all themselves. And in fact they have, you have just created an environment where they could succeed.

“If you create an environment where people can flourish, the company can flourish. It’s a bit like music. You let people sing.”

And John’s methods have evidently worked on a worldwide scale. He led a team of consultants who helped Apple establish its European market, worked in Silicon Valley, helped Standard

Chartered Bank transform their approach to technology in Asia, brought solutions to a difficult project with the attorney General of New South Wales, and transformed the diamond market for the Oppenheim family.

And he is very much hoping to bring that magic to Derry and transform the insurance industry in the UK and Europe. John says there is a shortage of young talent coming into the industry, an exciting industry which is going through a massive transition from archaic to digital, and needs talented people to ease that ambitious move. And so Alchemy was born.

“Through the Academy we train people in insurance and soft skills and we teach them project management,” he says, “We polish up their technical skills and get them all to a similar standard. Then with our partner companies we give them training and certification in the particular software. We coach and mentor them and they are given globally recognised qualifications and placed on projects. We have people at the moment in Dublin, in Milan, in Newcastle, Wales, London and Copenhagen working on projects. I’m hoping that these young people see that they don’t have to move away from Derry and live in a bedsit in London. I’m hoping that they can create a platform and a good place to live here in their hometown.”

John says that joining the Chamber of Commerce has helped him meet like minded business people and allowed him to shine the Alchemy light even brighter.

“We are completely new in the area,” he says. “I haven’t been here since 1981, and none of our investors have. So we and the investors were really welcomed by the business community here. We love meeting with the other businesses, collaborating and talking to them. And the Chamber provides a good platform for that. We have joined a sub-committee around driving digital education through schools and so we have volunteers some of my staff to coach teachers. Being part of that discussion is driving a transformational approach to how we bring the future pipeline of employees with the right education.

“And then there is the little things that are really important. We hired the Chamber to help our office launch, which went brilliantly. We had a fantastic turnout. There was a real buzz in the office and everyone got so excited about what we were doing. It was great.”

For more information on Alchemy, log on to www.alchemytechs.com.