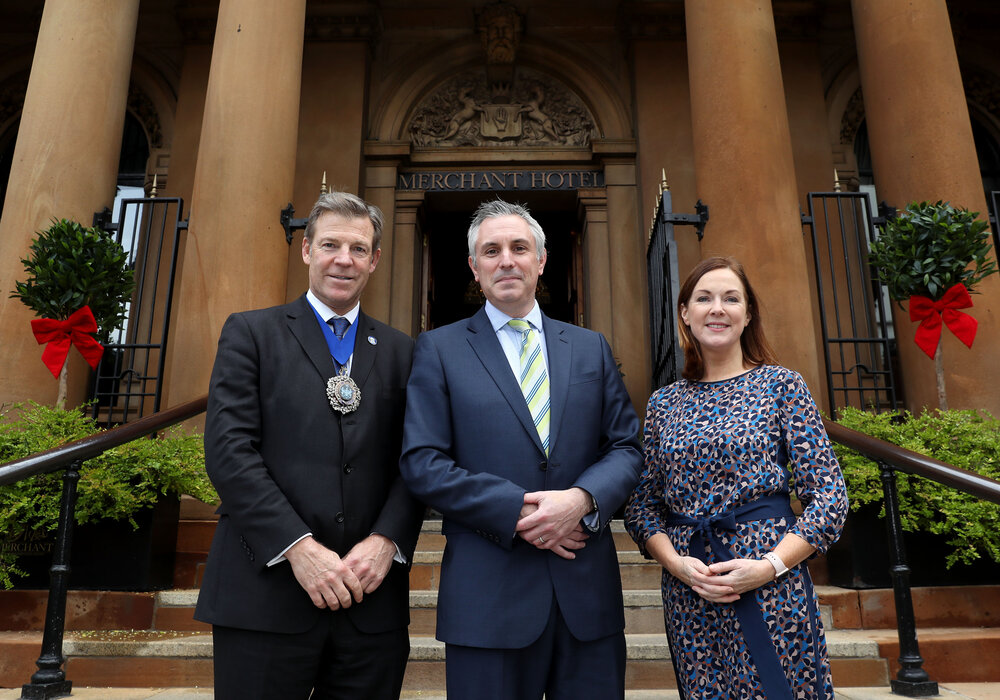 Andrew Jenkins, the Fintech Envoy for Northern Ireland, has met with and briefed a cross-section of leaders from business membership organisations, banks, fintech companies and local government.

Envoy Jenkins, Director of Arity which is part of the Allstate Corporation, who was appointed by the HM Treasury in September, outlined the worth of the fintech sector to the Northern Ireland economy and the potential which exists for further growth.

The business briefing also heard from the Rt Hon Lord Mayor of the City of London, William Russell who was visiting the city as part of a series of engagements.

Fintech is one of the fastest growing sectors of the UK economy, encompassing innovation in financial services including digital banking, payment technologies and crowdfunding platforms.  40,000 people in Northern Ireland are employed across the financial and professional services with 1 in 4 of these employed in technology roles.

Northern Ireland is regarded as a world-renowned driver of the fintech sector and has been named as one of the leading global fintech locations of the future, in the 2019/20 fDi league table alongside cities including Singapore, New York and London. Major international banks, insurers and fintech companies in the region include Allstate, Citi, Liberty IT, The CME Group, FSCOM and Datactics.

Despite this strong outlook, Envoy Jenkins injected a sense of realism and highlighted that a number of impediments needed to be addressed if the growth and potential for fintech in Northern Ireland was to be fully realised. This includes focusing on the skills and talent agenda and signposting start-ups to access of finance.

Andrew Jenkins, Fintech Envoy for Northern Ireland commented:“Since being appointed Fintech Envoy for Northern Ireland in September, I have made it my priority to engage with the various business leaders to harness the incredible potential which exists to lead the region and beyond in fintech expertise. This was my first engagement with business leaders who are critical to ensuring the ambition of the fintech strategy is accomplished.”

“This strategy seeks to further solidify Northern Ireland’s place as a fintech centre of excellence and to acknowledge the huge potential which exists right across the country. Despite being streets ahead of other regions, the fintech sector here has so much more to offer and in collaborating with business leaders, I am confident that we can grow the sector even further. We have unearthed something special in Northern Ireland with fintech and still, this is only the beginning, our true potential is ahead of us.”

“Currently the fintech sector generates a revenue of £6.6 billion pounds to the UK economy but with the right workforce armed with the necessary skills, the sector’s revenue will rapidly expand. Nurturing this talent is a significant challenge but I am committed to engaging the relevant groups to build and sustain an ecosystem of talent and skills which will allow innovation in the fintech sector to flourish.”

He added:“Another important issue is that of funding and I will be dedicating my time to signposting businesses to the funds and sources of finance which are required to start up, grow and develop.”

“My next step is to bring forward a regional strategy and to engage with the wider fintech sector and business groups to realise the economic benefits and potential associated with the industry here in Northern Ireland. I am also looking forward to hosting the Fintech National Network Symposium in Belfast, in June 2020 which will allow us to further showcase the world-leading fintech sector in Northern Ireland.”

“That’s why I’m here today with the Fintech Envoy for Northern Ireland, Andrew Jenkins. My message to local firms is clear: join me on overseas delegations and join me at international events in the City. I’ll be visiting around twenty-five countries across six continents in my year, as well as hosting hundreds of global firms in the City looking to the UK for innovation, such as at the Innovate Finance Global Summit in April next year.”

“This kind of collaboration between our two great cities means that we can better harness our fintech strengths, maximise opportunities available to us and strengthen the UK’s position as a world leader in the sector.”